Sparco race helmet I designed and painted for Doctor Greg Miller. The theme is a X-Ray skull with gears, bolts in the brain area. Greg races a Porsche so we included the Porsche logo in the front but not so it really stood out brightly. 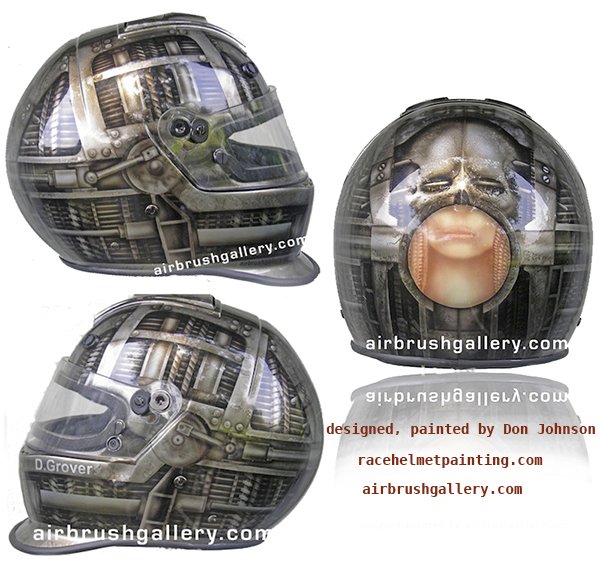 Bell race helmet designed and painted for Derek Grover by Don Johnson. Here is what Derek had to say
“A few years ago I commissioned Don to do a custom airbrush job on my new helmet for the 2009 IMSA racing season. My request, which I thought was a near impossible task, was to recreate the 1973 Emerson, Lake & Palmer album cover of H.R. Giger’s “monochromatic biomechanical industrial mechanism with a human skull, Brain Salad Surgery”. H.R. Giger, the concept artist of the creature “Alien” created this cover art for the 1973 release of the now infamous ELP album cover. I was so impressed with the artwork that Don created on my IMSA helmet that I only used it during one race and retired it to my trophy case in fear of ruining it with use. It now sits like a masterpiece of 21st Century Motorsports Art in my home. Derek M. Grover Cinematographer / Ex-Race Stilo race helmet with original design incorporating the colors of the Bulgaria flag into the helmet design. This was a short notice to completion helmet design and painting job which I completed within the time frame the customer had set. 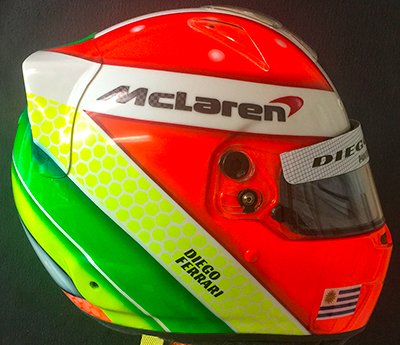 Bell RS7 race helmet I custom painted for Diego Ferrari who race’s McLaren for McLaren of Philly. This was a very interesting fun project that had to be completed in a very short time frame. The design was fairly complex, with the short time frame I had to get it completed it was a real challenge. Diego came up with the design I just had to adopt it to his new Bell RS7 carbon helmet. CONTACT ME today to get started on your helmet. 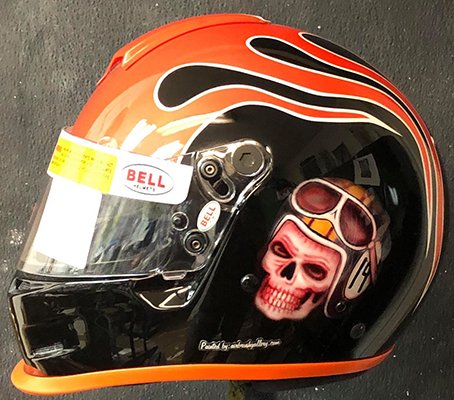 Bell GP2 youth helmet I custom painted for Vince Roy for his young son who is racing kid karts. This was to be a Christmas present for his son, he is one lucky little boy that is for sure. The design is sort of a take-off on his favorite driver’s helmets, Tony Stewart. I worked closely with Vince to make this just as he wanted. The orange trim around the bottom of the helmet really set’s the design off nicely. He will be the only kid with custom trim like this on the grid I would bet. Custom trim like that is available in about 12 different colors I would be happy to use any of those colors on your helmet when I design and paint it. Contact me today to get started on your helmet. 1-352-361-3403 call or text or e-mail helmetpaint@gmail.com to get started on your race helmet. Gabriel Glusman was one of three people to win a chance to race in the Indy Car Race of Champions 2017 and I was honored to work with him on a his helmet.Time frame on this helmet design, painting was very short but we got it done in time for the race. The Bell race helmet he sent me I came up with a design Gabriel really liked and was pretty sharp. Blue, yellow, black and white are the main colors with some honey comb effects thrown it to jazz the design up. 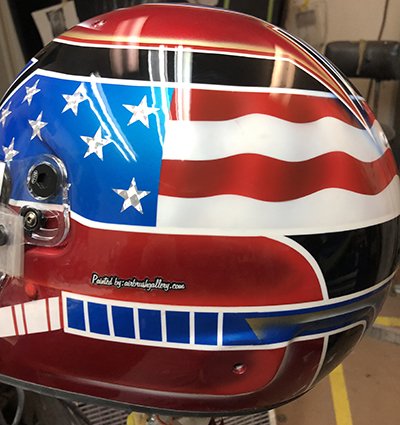 Bell race helmet for Chris I designed and custom painted is a candy apple red base color with graphics over that. Stars and stripes are the main graphics of the helmet design. Contact me today to get started on your helmet!! You deserve to own the helmet you envision, an original design that you can call your own. Every helmet I design and paint is a one-off there will never be another one!! Arai helmet design 7.12.18 is a race helmet design I worked on with a 12-year-old girl who races karts here in South Florida. She wanted it to match the graphics on her kart which were gold, white, black with a little carbon fiber vinyl. This was a fun project and I really liked working with her to come up with a design she loved. The race team logo and a lot of gold were used to really make this design work. Contact me today to get started on your race helmet, call or text 1-352-361-3403. 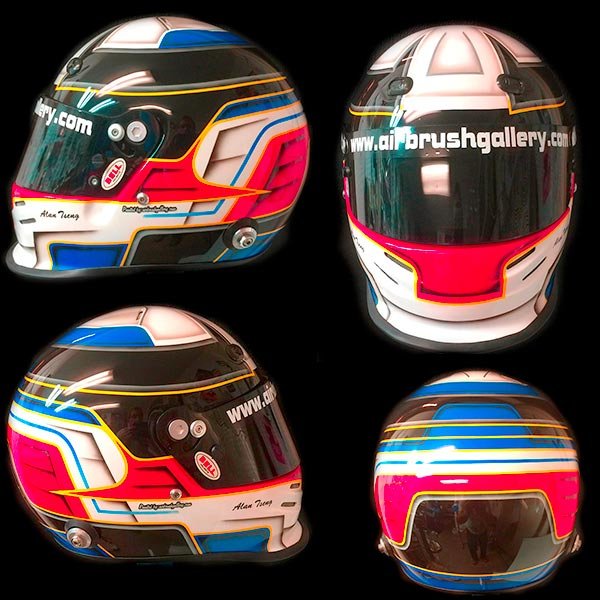 I designed and painted this Bell Race Helmet for Alan Tseng out in California. The design flows very nicely on his helmet. Together Alan and I worked to come up with this design, colors. Call or text 1-352-361-3403 to get started on your helmet today!!
“Hey Don,
Just received the helmet today. It is TRULY AMAZING! Thanks for everything. I will have you paint all my racing helmets in the future, and I will spread the word around in my racing community. Thanks Alan”
Best Regards, Alan Bell race helmet design 10-18 is an updated version of a race helmet I designed and painted for Trey several years ago. I left some of the carbon fiber showing on this Bell helmet which makes the graphics really pop. To get started on your new race helmet CONTACT ME today Don Johnson cal or text 1-352-361-3403.